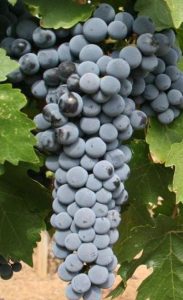 Cabernet Sauvignon may be the most famous grape varietal in the world. Cabernet wines usually have flavors of blackcurrant and white pepper. But “Cab” is so popular because it loves to bring on more flavors from ageing, oak barrels, and terroir (that famous French word for soil and environmental factors that are unique to a place). You may know it from Bordeaux blends or big reds from Napa and Sonoma, or from many other places around the world. Cabernet is a versatile grape that’s grown on every continent except Antarctica! Read on to discover more about this beloved grape.

History and Geography
Cabernet Sauvignon is incredibly popular now, but it’s only been around for a few hundred years. Scientists from The University of California, Davis believe that our star was born in the 17th Century when a Cabernet Franc vine was crossed by chance with Sauvignon Blanc. The famous Bordeaux winery Chateau Mouton began planting it in the 18th Century. It soon caught on all over Bordeaux’s left bank and became famous in blends with Merlot. Cabernet then travelled around the world – it is well-known in California and Washington State in the USA, Australia and Chile. But it can be grown in many climates, so we can find it thriving in many places – the former Soviet Union, Lebanon, Northern Africa, and New Zealand to name a few.

Blends
The Bordelaise love to blend Cabernet Sauvignon with Merlot –Cabernet gives the tannic “structure” and dark fruit flavors, while Merlot is juicier and adds red fruit flavors like cherry and raspberry. California has picked up on this recipe with its many famous Meritage blends (note: not a French word, the American “Meritage” rhymes with “Heritage”). It can also be found blended with Sangiovese in many famous Super Tuscan wines from Italy, and since the 1980s has increasingly been blended into Chianti, while the Australians are known for blending it with Shiraz.

How it drinks
Such a versatile wine, it’s hard to describe a “typical” Cabernet Sauvignon. Warm climates bring bright fruit, with concentrated blackberry notes and tannin. Milder climates give us an earthier wine with notes of green pepper (like its Cabernet Franc parent) and grassy notes (like Sauvignon Blanc). Cabernet is famous for benefiting from oak ageing from which it picks up complex flavors like vanilla and spices. Its tannins make it a very ageable wine – those expensive Bordeaux and Napa wines can cellar for twenty years or more. But many winemakers are producing a more approachable style that can be enjoyed now.

Pairings
Cabernet Sauvignon is a big and tannic wine that can overwhelm delicate dishes, but fatty foods help soften it. Hence, the classic pairing for Cabernet is steak. Mushroom dishes are also a great pairing, especially with European styled Cabernet. More fruity New World Cabernet can even be paired with dark chocolate!