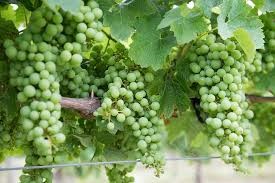 Chardonnay is the best known and most widely planted white grape in the world. You may be most familiar with big, buttery Chardonnay from California. But “Chard” comes in many styles including steely Chablis and sparkling Blanc de Blancs from Champagne. Flavors can range from crisp apple to juicy peach, or in the hottest climates tropical fruits like mango. Chardonnay is also vinified in many styles from light and crisp to heavy and creamy. Click through to learn more about this world famous white!

Chardonnay has been a popular white grape in France since at least the early Middle Ages. The Romans brought a now obscure white grape called Gouais blanc to Eastern France. They planted it near existing Pinot Noir vines, and Chardonnay was one of several chance crossings between Pinot and Gouais (others include the Gamay grape famous in the Beaujolais and Aligoté, Burgundy’s other white grape). Chardonnay first became famous in Burgundy, where great 100% Chardonnay White Burgundy is still made today. It also became the white grape used in Champagne. Because of its versatility – it can handle cool, moderate, or warm climates – it has travelled all around the world, and is notable in Italy, California, Australia, and South America.

The most common blends of Chardonnay are sparkling wines. Champagne may blend Chardonnay, Pinot Noir, and Pinot Meunier. Many other sparkling wines around the world have copied this formula. The town of Limoux, in Southern France, blends Chardonnay with Mauzac to make the sparkling Blanquette de Limoux. In still wines, Italians often blend some Chardonnay with native grapes to add body to a white wine. Producers all over the New World have experimented with blending Chardonnay with Riesling, Semillon, and Viognier among others.

Because it can be grown in all climates and takes well to many different techniques in the winery, there is no such thing as a “typical” Chardonnay. Cool climate Chardonnays such as Chablis are crisp and acidic, with hints of flint along with pear and citrus notes. More moderate climates such as the Cote d’Or in Burgundy or California’s Sonoma Coast bring notes of stone fruit, while oak aging adds body and notes of vanilla or spice. Hotter climates such as the Napa Valley can bring out tropical fruit flavors such as mango or even pineapple, and malolactic fermentation and lees stirring add the buttery flavor and creamy texture that many people associate with Chardonnay.

How best to pair a Chardonnay depends on its style. Crisp, light Chardonnays like Chablis go best with simple food – think baked fish or chicken with herbs. They’re also nice with light shellfish such as mussels. Bigger Chardonnays can go with bigger food – meaty fishes like halibut or creamy dishes such as fettucine alfredo. And those famous buttery California Chards pair well with lobster or even pork or veal. Oaked Chardonnays can compliment smoked or grilled fish or chicken – they nicely pick up the smoky flavors. Chardonnay tends not to do well with very spicy foods such as Indian or Thai, but foods with a touch of sweetness like corn or yams do quite well.