How is it possible that one of the oldest wine areas in France is also one of its least known? Lirac is located in the département de Gard, near Nimes at the most southern end of the Rhone Valley. It produces red, white and rosé wines which are often very delicate but still well-structured. This area of France is a great place to visit. Nimes is a vibrant city with a very long history and many overlapping cultures. The wines here are approachable and often very well priced because it is relatively unknown. 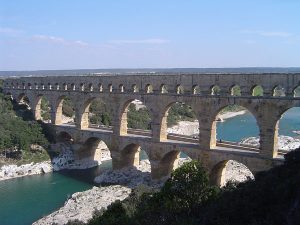 Wine has been grown in this area since before the arrival of the Romans. However, it became an export crop after Roman conquest and settlement. The Emperor Augustus made Nimes the capital of the Roman province of Narbonne and engaged in extensive development. He also used the area as a place to settle retiring soldiers from the Roman army. They were granted land, partially as a reward but also to make sure that Italy didn’t fill up with retired soldiers who might lead rebellions. These soldiers were granted tracts of land and built small villages and communities, including Lirac.

Lirac’s wines were always highly regarded. Romans drank them, and later popes and kings bought them and commented on their quality. In order to maintain the reputation and desirability, Lirac was one of the first areas to create quality standards for their production. In 1737, King Louis XV of France ordered that casks of wine shipped from this region be branded with the letters CdR for Côte du Rhône. Although the origin of the AOC system is historically contested, this fact makes the Lirac and Rhône regions contenders for the title of “first.”

One of the area’s other distinctions is not so pleasant. It is also regarded as the first region in France to be hit with the Phylloxera pest. The winemaker at Château de Clary was experimenting with grape varieties and planted some American grapes which were contaminated with the pest. The disease spread, devastating the area and eventually much of French and European vineyards. The recovery from Phylloxera was slow but it also offered an opportunity for improvement. The winemakers who were able to survive the outbreak did so by producing large volumes of a quaffable but unremarkable rosé as table wine for cafés. However, some winemakers chose to focus on quality and they replaced their vines with noble grapes and produced smaller quantities of high quality wine. One of these producers was named Count Henri de Régis, of Château de Ségriès. In the 1930s he focused on improving the quality of his wines and vines until the region became eligible for a protected appellation which was granted in 1937. In 1945, the Count achieved his goal – his vineyards were granted the status of cru. 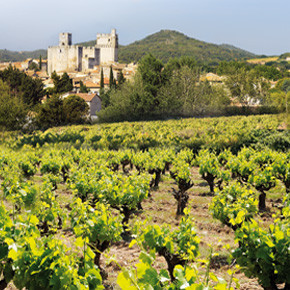 Lirac is the most southern of the Rhone Valley appellations. It has a Mediterranean climate with plenty of sunshine (2,700 hours per year, compared to an average of 1,800 hours of sunshine in France overall). The Mistral Wind, a strong, dry wind coming from the north, blows 180 days a year, which protects the grapes from humidity and disease. The average year-round temperature is about 57 degrees. Rainfall is generally low and happens in the winter and spring, which leaves the grapes with long dry periods during the summer and harvest seasons.

There are three soil types in the appellation: limestone, rocky alluvial and sandy pebble. The commune of Lirac is mainly the alluvial type. 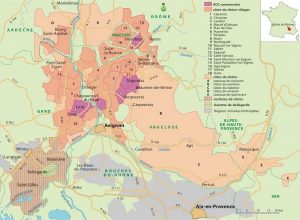 Red Wines: Must be at least 40% Grenache Noir enhanced with 25% Mourvedre and/or Syrah. The secondary red grapes (Carignan and Clairette Rose, Counoise, Grenache Gris and Piquepoul Noir) can be used to round out the wine, however none of the secondary grapes can be comprise than 10% of the blend. White grapes are permitted, but only up to 5% of the blend.

White Wines: Must be at least 70% of the primary varieties (Bourboulenc, Clairette, Grenache Blanc, Roussanne), however no single variety can comprise more than 60% of the blend. The secondary varieties (Marsanne, Piquepoul Blanc, Ugni Blanc, and Viognier) may not make up more than 30% of the blend and no individual secondary variety can exceed 25%. A white Lirac therefore must include at least 4 different white grapes, two primary grapes and two secondary grapes.

Rosé Wines: Must be at least 60% Grenache Noir with 25% of Mourvedre and/or Syrah. Carignan can be used up to 10% and white varieties up to 20% are allowed.

Reds tend to be elegant and soft, although some winemakers can achieve wines that are similar in power to Chateauneuf du Pape at a fraction of the price. The color is intense ruby with a pronounced nose of black fruit, Mediterranean herbs, baking spices and smoke. Over time they will also develop notes of leather, cocoa and forest floor.

Rosés range in color from quite pale pink to intense salmon. They show strong aromas of flowers, strawberries and pomegranate. Acid is quite high but very well balanced and they are vinified dry. They can be quite full rosés and they pair very, very well with spicy food like bouillabaisse.

Whites are floral and fruity with pretty mineral notes. Acacia, pear, white peach, melon and pineapple notes are common. They are very fresh wines with good acidity and a long finish.

Wines to Look For 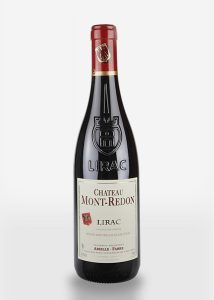 One of my favorite Rhone producers, Chateau Mont-Redon, is fortunately relatively easy to find in the United States. They produce all three Lirac types. The rosé is a very good example of the Lirac style. It shows strawberry and raspberry notes, bright minerally acidity and a full palate with a moderately long finish. Their red also shows strong aging potential, very nice balance and is a great food wine. It is similar in style to their Chateauneuf du Pape, but is much, much less expensive.

Another recent favorite of mine, which is readily available is Lirac by Roger Sabon. The 2017 blend is 70% Grenache, 10% Syrah, 10% Cinsault and 10% Carignan. The 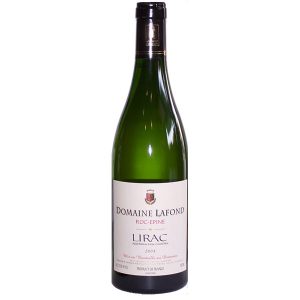 nose shows intense crushed blackberry and black cherry baking spice, violets and smoke. The tannins show silky textures balanced by crisp acidity, ripe blackberry and mineral tanginess, the violet is still present and it’s joined by lavender. The finish is long and spicy. This wine has excellent aging potential but it is also very approachable and enjoyable right now.

An excellent example of Lirac blanc is Lirac Blanc Roc-Epine from Domaine Lafond. The blend for this wine is 50% Grenache, 30%Roussane and 20%, Viognier. It shows notes of fresh green apple, lime and white flowers backed by crisp and clean acidity. The nose and palate are both lively and it makes a wonderful aperitif or an accompaniment to ceviche.

Because Lirac produces such diverse wines, you can find a Lirac which will go with just about anything you like to eat. Some of the more traditional or typical pairings are beef filets with peppercorn sauce or game dishes with red Lirac wines and Mediterranean seafood dishes like grilled squid, seafood risotto or pan-seared scallops with either Lirac whites or rosés. One of my favorite parings is Chateau Mont-Redon Lirac Rose with pizza Nicoise.

Because these wines are such high quality they are also outstanding on their own. The rosés are perfect summer sippers and barbecue wines. The reds are a great pairing for Thanksgiving dinner because the red fruit and bright acidity both match and balance the rich foods on the table.