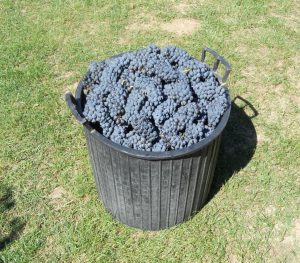 Merlot is a famous red grape with fresh, ripe fruit flavors. Quite popular in the 20th Century, merlot’s reputation in America had a setback when the 2004 film Sideways portrayed a wine connoisseur who constantly denigrated the varietal. (We’d like to note that the Miles character’s prized 1961 Chateau Cheval Blanc is a Cab-Merlot blend, so the joke is really on him). Many fine merlots are being made from France, California, and around the world. Click through as we explore this underrated red.

History and Geography
Merlot is thought to be named for the blackbird (merle in French), whose blue-black color the grape resembles. It began appearing in French vineyards in the late 1700s, and its origins were unknown. Researchers at UC Davis have traced its lineage to a crossing of Cabernet Franc (which is also a parent of Cabernet Sauvignon) and an unnamed wild varietal. It became popular in Bordeaux, especially in the left bank region, where it is often blended with Cab Sauv. It travelled to Northern Italy (in the Veneto it was called Bordò, after the Bordeaux region it originated from) in the 1800s. It grows well in Eastern Europe, finding its way into vineyards in Croatia, Hungary, Bulgaria, and Slovenia. It is also widely planted in the New World – especially in Washington State and California in the USA, Australia, and South Africa.

Blends
Merlot’s most famous blending partner is Cabernet Sauvignon. Merlot’s bright red fruit and lighter tannins help tame a dark, tannic Cab. This recipe is famous in Bordeuax, as well as in California’s Meritage blends (note: not a French word, the American “Meritage” rhymes with “Heritage”). It may also be blended with other Bordelaise grapes like Cabernet Franc, Petit Verdot, and Malbec.

How it drinks
In body, Merlot tends to be down the middle – heavier than a light red like Pinot Noir, but not as big as a Cabernet or Red Zinfandel. Red plum is the most typical flavor of this varietal, along with cassis or cherry, and herbal notes such as sage, rosemary, or black tea. With some age, merlot can show leather, mushroom, and tobacco flavors. Merlot can take well to oak, which adds more body as well as notes of coffee, vanilla, walnuts, or even chocolate. Many inexpensive merlots are meant to be enjoyed young, although oak aged ones from premium Bordeaux, Napa, or Walla Walla producers can age as much as 20 years, or much more in the best Cabernet-Merlot blends.

Pairings
Merlot is a classic red meat wine – it’s one of my favorite pairings with hamburgers. Lighter merlots are great with vegetarian dishes that include big flavors like mushrooms, chard, or radicchio. Lighter merlots can be paired with flavorful fishes such as salmon or trout, or try them with bacon-wrapped prawns!