Napa, California is the premier wine growing region in the United States. Wines from Napa have achieved worldwide fame and are acknowledged as very high-quality wines. Wine has been produced in the Napa area since the middle of the 19th century. Some of the regions which exist today were named after these early wine pioneers, such as Charles Yount (Yountville) and Thomas Rutherford. Wines from this area were being recognized for quality in European competitions as early as 1888, when a wine from Inglenook Winery won a prize at the 1889 World’s Fair in Paris.

Napa might be best known for it’s “cult Cabernets” which command high prices and a lot of media buzz, but Napa makes exceptionally high quality wine at virtually every price point.

1864 – Marriage of Elizabeth Yount (grandchild of George Calvert Yount, the first permanent Anglo settler in the Napa Valley and the namesake of Yountville) to Thomas Lewis Rutherford. George gave the couple 1000 acres of land in the area which Rutherford dedicated to viticulture. Another of George Yount’s grandchildren, Elizabeth Ann Davis, married William Watson in this year. Watson was the founder of Inglenook Winery.

1890s – The first of two crises hit the Napa wine industry. Phylloxera, which was already ravaging European wine production, arrived in Napa. Some winemakers pulled up their vines and turned to nut and fruit cultivation to stay solvent. Some wineries were able to remain afloat by obtaining contracts to produce sacramental wine for religious instutions.

1965 – Robert Mondavi left his family’s winery (Krug) and founded his own cellar in Oakville.

1976 – The “Judgement of Paris” catapulted Napa to international recognition. Two wines, Chateau Montelena’s Chardonnay (1973) and Stag’s Leap Cellar’s Cabernet Sauvignon (1973), were deemed the best of their type in the world by a panel of experts, both European and American, in a blind-tasting format.

2017 – Wildfires hit the area and damaged or destroyed several vineyards. The fires came near harvest season, which caused winemakers a lot of concern about how the smoke and heat would affect grapes still hanging in the fields. 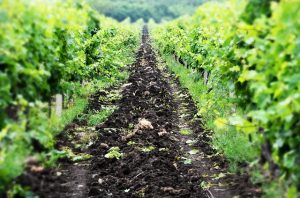 As the name suggests, the Napa Valley is bordered by mountain regions. The Mayacamas mountains line the western and northern sides of the valley and the Vaca mountains are on the east. The Valley lies at the north end of the San Francisco bay and is about 30 miles long. It runs northeast to southwest and is 3 miles wide at its widest point. The mountains surrounding the valley are important parts of Napa’s climate and influence the wines produced. The Vaca mountain range protects the valley from the hot and dry winds of the Central Valley and helps to trap moisture coming up from the bay. The Mayacamas mountains differentiate Napa’s climate from Sonoma’s by blocking much of the cool, wet air from the bay. Both mountain ranges are quite high. The two highest points in the AVA are Mount Helena at the northwest end, which is 4,343 feet tall. Mount Veeder and Atlas Peak flank the entrance to the valley at the other end.

It is hard to make generalizations about the soils throughout the valley because each area differs – there are more than 100 distinctly different soil types throughout the valley. Most of valley have volcanic soils mixed with ancient marine sediments from prehistoric flooding from the bay. The differing soil types are one of the many reasons why Napa has so many smaller AVAs embedded in it.

The climate also varies throughout the valley depending on the orientation, height, proximity to the Pacific Ocean and the inclination of the vineyard in question. Like most of the premium viticultural areas in the world, Napa has a Mediterranean climate with cool, wet winters and warm to hot, dry summers. The mountains also help to provide a large diurnal swing – the difference between daytime temperatures and those at night. This makes Napa’s climate excellent for the production of well-structured wines which age nicely.

Napa is most famous for its Cabernet Sauvignon, Chardonnay and Merlot wines. However, the climate is favorable for growing many varieties and Pinot Noir, Pinot Gris/Pinot Grigio, Zinfandel, Cabernet Franc, Sauvignon Blanc, Petit Verdot, Malbec and many other varietals are successfully grown in the valley. 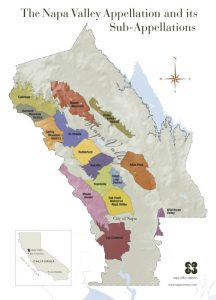 Napa Valley is a broad AVA and it contains several smaller AVAs, sometimes referred to as “nested” AVAs. When you see a label that says the wine is Napa Valley, that means that all of the fruit was grown somewhere in the valley, but not necessarily in the same area. Wines which are marked with a smaller AVA are both Napa Valley wines and wines from the smaller AVA listed on the label. The Napa Valley currently has 16 nested AVAs:

Napa is most well-known for burly Cabernet Sauvignons and buttery Chardonnays, but those wines are only part of what Napa’s winemakers produce. While big and bigger was a trend in California wine making during the 1990s and early 2000s, more recent vintages have also shown wines with elegance, restraint and fluidity. Most recently, wines produced in California have been much more expressive of the fruit and the terroir of the area rather than being a canvass to show off the most up-to-date wine making techniques.