Sonoma County demonstrates something very interesting about American AVA laws. Under the current system, counties are automatically permitted to be legal designations of wine origin. However, contrary to popular belief, Sonoma County is not itself an AVA. It does contain 17 designated AVAs within its boundaries. Because of it’s size, it’s very difficult to generalize about the area. Each of the 17 AVAs has distinctly different soil and climate profile which in turn creates very different styles of wine. Sonoma tends to be known for it’s cool-climate grapes like Pinot Noir and Chardonnay. However, it also produces bolder and riper Cabernet Sauvignon and Merlot wines as well. Look for Chardonnay and Pinot Noir from the Russian River Valley if you tend to like wines from Europe and Cabernet and Merlot from the Alexander Valley for examples of the bolder styles. In both cases, you will likely find a wine that is not only enjoyable when it is released, it will have a good potential for aging and developing over time.

1824 – Grapes were planted by the Spanish at Mission San Francisco Solano which is located in what is now the city of Sonoma. These wines were mainly used for Catholic religious celebration.

1834 – The government of Mexico, who at that time were in control of California, secularized the missions and turned San Francisco Solano over to the area’s governor, General Mariano Vallejo. Vallejo founded the city of Sonoma and took over the mission’s vineyards as his personal property.

1855 – A Hungarian immigrant named Agoston Haraszthy purchased the Vallejo vineyard and renamed it Buena Vista, which claims to be the oldest still-operating winery in California. Haraszthy quickly established himself as central to the growing California wine industry. He accepted a commission from the state legislature to return to Europe to study European viticultural techniques.

1862 – Haraszthy returned from Europe with thousands of cuttings from prized European vinifera species from France, Germany, Italy and Spain. The legislature reneged on reimbursing him for the trip so he both cultivated and sold these cuttings to pay the bills. This established old-world vinifera grapes as the dominant varietals planted in California.

1873 – Phylloxera discovered in Sonoma. During the 1860s, many immigrants from agricultural regions of Europe were driven out of wine production by the louse. Unfortunately, they brought their vines with them, which contributed to the pest’s spread into California. The development of New World wine was strongly influenced by the Phylloxera outbreak in California and beyond.

1919 – Passage of the Volstead Act (Prohibition) lead to the shuttering of wine and spirits production commercially. Many of Sonoma’s producers were able to survive by returning to the region’s roots as a major producer of sacral wine, the production of “medicinal” alcohol and supplying juice for a new legion of home winemakers who were self-producing to get around the edict of prohibition. Although grape production did not suffer in Sonoma County, production was consolidated.

1933 – Repeal! Although too late for many of the historic winemakers, repeal and World War II helped stabilize and begin the process of rebuilding the industry. The war made importation of European wines difficult, forcing consumers to turn to domestic production for their drinking needs.

1945-1970s – Sonoma becomes a major producer of wine grapes, although there were few producers of quality. Jug wine and other inexpensive, mass-produced wines were the dominant market outlet for the grapes grown in Sonoma.

1980s – The introduction of the American AVA system helped to focus California and Sonoma wine production on quality, rather than quantity. Deceptive tradenames were prohibited under international agreements, so producers were no longer able to market wines as their European equivalents (i.e., no more California Chablis). Today, Sonoma County is a recognized AVA and has 17 current sub-AVAs contained within it. This is a testament to the current high quality of production in the area. 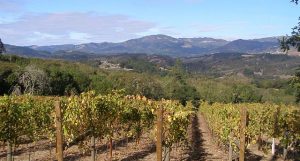 Sonoma County is quite diverse. From the cool, maritime climate of the Sonoma Coast region up to the high-mountain areas in the Mayacamas Mountains, the county’s soil, climate and influences vary dramatically. The county has 58,280 acres planted to grapes but has more soil varieties than all of France. Vineyards range in altitude from sea-level to 3,000 feet above sea-level. One constant is the Russian River, which acts as a conduit for coastal fog, which helps to keep the area cool and brings in moist air, especially at night. Because of the fog, many cool-climate grapes like Pinot Noir thrive here. The variety of terroir and microclimates also allow the area to produce a broad range of wine styles. For example, lower-elevation inland Chardonnay develops the round and tropical characteristics of warm-climate California-style Chardonnay while Chardonnays grown in the Russian River Valley and at high elevations show more characteristics of apple, peach and pear, similar to a more French style of Chardonnay. 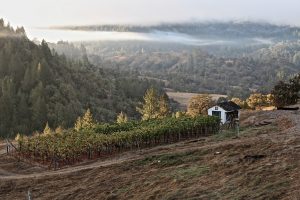 These variations are why it is important to pay attention to the sub-region of Sonoma because each region is different and expresses its terroir quite well.